IPCC describes radiative forcing as “the change in net irradiance (solar plus long wave; in W/m2) at the tropopause after allowing for stratospheric temperatures to readjust to radiative equilibrium, but with surface and tropospheric temperatures and state held fixed at the unperturbed values”. Radiative forcing in agriculture places is determined by changes in local albedo which depends mainly on the reflectivity of the land.

A brilliant example is “Campo de Dalías” which is located in the province of Almería (Spain) which has converted around 26000 ha of land into greenhouse area from 1970 to 2007. 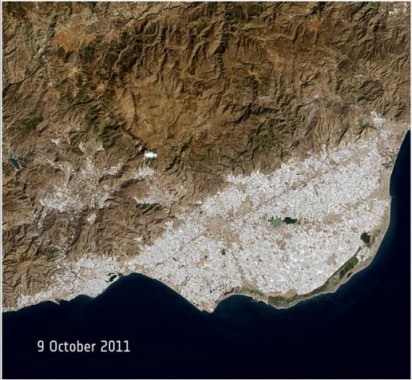 Researches in this area have proved that greenhouses provide an increase in the surface albedo due to its color and texture: they are white and brilliant which reflect very well the solar radiation. Greenhouses are able to offset the radiative forcing by 2 W/m2.Higher surface albedo reduces net incoming shortwave energy, and therefore diminishes the energy absorbed by the surface emitted as long wave radiation, resulting in lower surface skin temperature, as well as a lower transfer of sensible heat over greenhouses with respect to pasture cover.The lower surface temperature, and the decrease in the total available energy at the surface that needs to be dissipated, generate the cooling trend detected in the near-surface air temperatures in this farming area.

Benefits to the Environment

In this area in specific, it has taken place a cooling of 1,6ºC over a period of 20 years compared to surrounding regions as a result of polythene-covered greenhouses being installed over a vast area that was previously open desert.

It is demonstrated that 1ha of greenhouses can offset 400 tCO2 per year.