The solar energy absorption by water is higher in the surface since I is minor than in deeper water. The temperature of the surface water is around 25ºC and the deep water is about 5ºC. The temperature of the surface is used to  vaporize a working fluid, which has a low-boiling point. The vapor produced expands and spins a turbine coupled to a generator to produce electricity.The vapor is then cooled by seawater that has been pumped from the deeper ocean layer. It condenses the working fluid into a liquid since in this way, it can be reused.

OTEC offers global amounts of energy that are greater than other ocean energy options. Ocean thermal energy potential varies depending on the location.

Places painted in a red color are zones with a higher geothermal potential than blue ones.

For example, fresh water can be used to supply a village; nutrients can be used for multi-species mariculture producing harvest yields which far surpass naturally occurring cold water upwelling zones; cold water for cooling greenhouses or for cold bed agriculture. The cold water can also be used for air conditioning systems or for refrigeration systems.

OTEC closed cycle uses a fluid with a low boiling point to spin a turbine and, by means of an electrical generator, generate electricity. Warm surface water is pumped through a heat exchanger to vaporize the fluid.The expanding vapor turns the turbo-generator. Cold water (from deeper water) is pumped through a second heat exchanger, condenses the vapor into a liquid, which is then returned to the system. 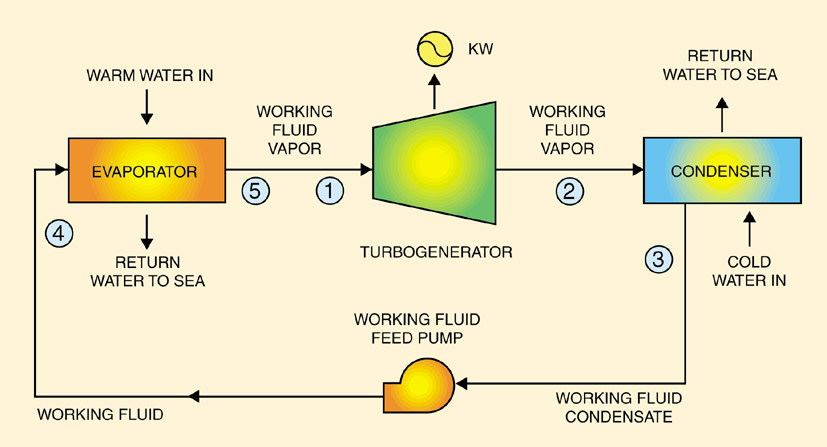 An open cycle OTEC uses the surface seawater directly to generate electricity. First, the warm seawater is pumped into a low-pressure container where the fluid boils. Sometimes the steam drives a low-pressure turbine attached to an electrical generator. The steam, which has left its impurities in the low-pressure container, is now pure fresh water. It is condensed into a liquid (due to cold temperatures from deep-ocean water). This water is suitable for applications as drinking water, irrigation or aquaculture.In other cases, the steam is used in a gas lift  technique of lifting water to significant heights.

An OTEC hybrid cycle is the combination of the features of the closed and open cycle systems. Warm seawater enters a vacuum chamber and is flash-evaporated, similar to the open cycle evaporation process. The steam vaporizes the working fluid of a closed-cycle loop on a vaporizer.The vaporized fluid then drives a turbine to produce electricity. The steam condenses in a heat exchanger and provides demineralized.

OTEC facilities can be located near shore, shelf-based or floating. OTEC facilities that are located in near land do not require sophisticated design or the more extensive maintenance associated with open-ocean environments. In addition, these sites allow plants to operate with related industries that require desalinated water.

One disadvantage of land-based facilities arises from the turbulent wave action in the surf zone. One way that OTEC systems can avoid some of the problems and expenses of operating in a surf zone is by building them just offshore in waters ranging from 10 to 30 meters deep. This type of plant would use shorter intake and discharge pipes, which would avoid the dangers associated with turbulent surf. OTEC plants can be mounted to the continental shelf at depths up to 100 meters.The complexities of operating an OTEC plant in deeper water may make them more expensive than land-based approaches.