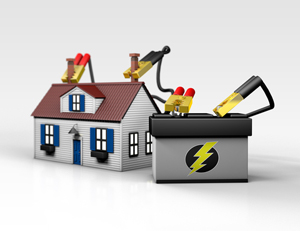 Home batteries capable of storing electricity for later use could protect homeowners from unexpected power outages. But Bodhi Rader of the Rocky Mountain Institute, a non-profit energy research organization, says there’s an additional benefit for homes with solar panels.

RADER: “And the great thing is when you pair a battery with solar power, you can continually power your home through disasters or just regular utility outages.”

Currently, a battery the size of a small refrigerator is capable of powering a home for eight to ten hours, but the high price of these systems makes them impractical for most people. But Tesla Energy has just announced a new, cheaper home battery storage system. While still expensive, Rader says it will fundamentally change the market.

RADER: “Tesla Energy’s announcement moves us years ahead in terms of affordability – and so I think we can expect that these systems will become economic much more soon than many of us expected.”

Rader says home battery storage systems will probably make economic sense in places with high electricity rates in the next five to fifteen years. And as the technology improves, consumers may soon have the ability to become more energy independent.