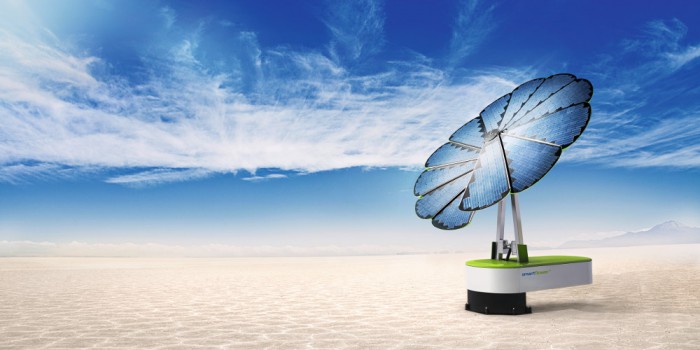 An Austrian company Smartflower recently unveiled a unique and innovative solar energy system, which does away with traditional roof-top mounted solar panels. The so-called Smartflower POP system is a 3.2 kW solar power array that is ground-mounted. It gets its name from the folding panels, which close up at night and in strong wind conditions, and automatically unfold again in the morning. The units are available in 8 different colors.

The Smartflower features a dual axis tracking system that works to orient the panels directly at the sun at all times. This enables the system to harvest 40% more solar energy than a conventional fixed solar power array, according to the company. They also claim that the units can produce between 3,400 and 6,200 kWh of energy per year. Also, according to the website, the Smartflower achieves a degree of self-utilization of around 60%, which is a big improvement over a comparable rooftop mounted unit that achieves around 30%.

The units are also a lot more portable, and can easily be removed from its stand and moved to a new home if required. Due to the Smartflower’s design, the company also maintains that losses due to dirty panels or overheating are greatly reduced. The system is also apparently very simple to install and should take no more than an hour to do so. After that it pretty much functions autonomously and automatically.

According to the website, the Smartflower is available through one of its dealer partners, which appear to be mostly located in Europe, although other interested parties can inquire directly about the system. There doesn’t appear to be any pricing listed for the units on the company website.