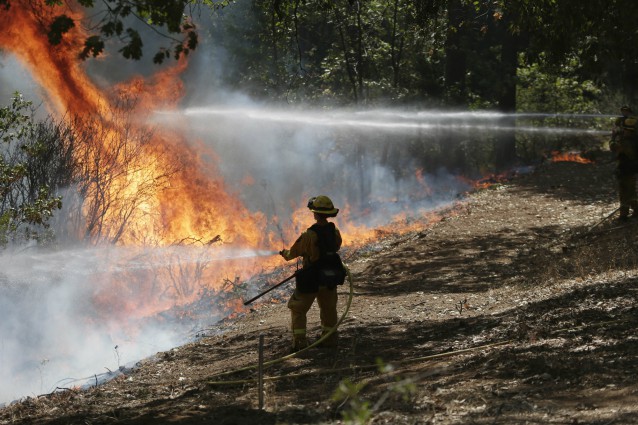 As California’s historic drought continues into its fourth year, the state’s forests are being hit hard by years of below-average precipitation. According to a new study conducted by the U.S. Forest Service, at least 12.5 million trees in California’s national forests have died during the current drought — adding more brittle, dry vegetation to areas already threatened by potentially explosive wildfires.

“The situation is incendiary,” William Patzert, a climatologist for the Jet Propulsion Laboratory, told the Los Angeles Times. “The national forest is stressed out.”

The count comes from an aerial survey conducted by the Forest Service last month. Using a digital aerial sketch-mapping system, researchers looked at tree health in areas throughout various national forests and parks throughout the state. They found 999,000 acres of dead trees, a figure that they expect will grow as the drought continues into the summer months. The last time that California saw such a massive die-off of trees was during the drought conditions of the mid-to-late 1970s. Though no aerial surveys were conducted during that time, ground reports estimated that 14 million trees died between 1975 and 1979. 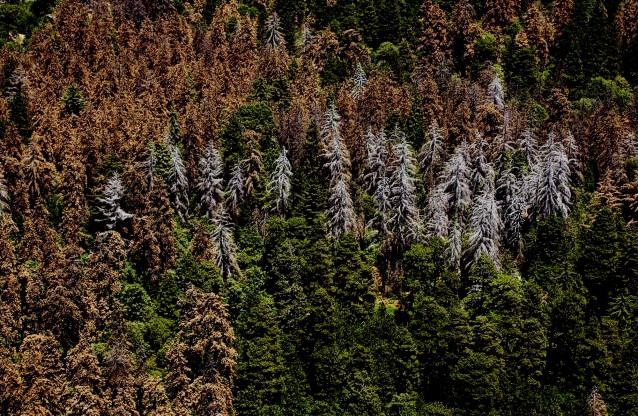 Scarce water isn’t the only factor driving the death of California’s trees — bark beetles are taking advantage of the stressed, dry trees. Without proper hydration, the trees are unable to produce the sticky resin that is their primary defense against the beetles, which eat away at a tree’s inner bark, leaving it dry and vulnerable to disease and death. Bark beetles thrive in dry, warm conditions, and officials say they’ve seen an increase in the number of bark beetles after years of drought and warmer-than-average winters.

“It’s scary in areas — the amount of dead and dying trees I am seeing,” Tom Smith, a forest pest management specialist for the California Department of Forestry and Fire Protection who has studied bark beetles for 15 years, told the San Francisco Chronicle. “This is the worst I’ve seen.”

According to one U.S. Forest Service official, the number of trees dying from beetle or drought-related causes has more than doubled in the past year. And as the dead trees combine with dried grass and shrubs, what once would have remained a low or moderate intensity fire runs the risk of becoming a raging wildfire.

“Five years ago without a drought in California you would still get wildland fires. But the vegetation wouldn’t burn as quickly,” Mike Mohler, a fire captain with CAL FIRE, told NBC News. “Now there’s zero moisture and you get explosive fire growth.”

California has already recorded 85o wildfires this year, a 70 percent increase from average.

In light of California Governor Jerry Brown’s executive order to reduce the state’s greenhouse gas emissions by 40 percent below 1990 levels by 2030, an increase in wildfires could have repercussions beyond forest ecosystems: it might also slow efforts to curb the state’s emissions. According to a study conducted by the U.S. National Park Service’s lead climate scientist, unnaturally intense wildfires are causing California forests to emit more greenhouse gases than they absorb — findings at odds with the state’s 2006 climate law mandating that by 2020, all ecosystems must be releasing no more carbon than they’re absorbing.

According to Climate Central, California spends more money fighting forest fires than 10 other Western states combined. Between 2003 and 2012, the state spent an average of $400 million a year fighting fires.

While the current drought conditions don’t favor a tame — or cheap — fire season, 95 percent of fires in California are human-caused, a fact the state is trying to draw attention to with Wildfire Awareness Week, which kicked off Monday.

“If there was ever a time for people to be more careful about what they do,” John Laird, secretary of the California Natural Resources Agency, said “this is it.”