THE GOGORO SMARTSCOOTER IS A ZERO EMISSIONS, ELECTRIC POWERED TWO-WHEELER DESIGNED TO BE BOTH USER-FRIENDLY AND ACCESSIBLE TO THE MASS MARKET. 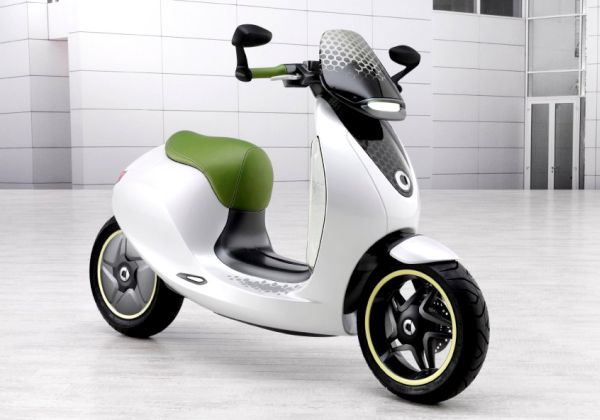 Revolutionary scooters from a fresh Taiwanese start-up hold the potential to wipe out the competition and completely transform urban transportation. This is not only because of the sleek design, electric engine, and great ambition, but also because the two-wheelers come with a whole new system for battery charging- no plug-in involved.

Some of you might disagree, but currently there are two main drawbacks associated with electric vehicles, which pop up every time there is a need of weighing pros and cons. Both of them are related to the battery- the first is charging, and here I mean both frequency of occurrence of charging stations and time that it takes for sufficient recharge, and the second is disposal and recycling of old batteries.

These two limitations are exactly what the new start-up Gogoro addresses with their new battery swap concept for their sleek and fancy new first time ever smart scooter. The company is proud to have secured $150 million from influential investors, which should be sufficient to give the idea the initial push it needs.

Let’s first have a look at what the vehicle has to offer. Starting with the looks, the designer and company CEO Horace Luke clearly put all his knowledge and experience into creating a truly beautiful mode of transport. Having companies like Microsoft, Nike and HTC under his belt, it is even not surprising that his creative mind could come up with such a design.

The so called smart scooter has some very unique and very cool features, including LED headlights, and bluetooth connection that allows changes of various settings through your smartphone- from selection of new tunes for startup, all the way to actually shutting down the thing, very similar to Trefecta. The speed of 50 km/h (30 mph) can be reached in 4.2 seconds, but it can only go an extra 10 km/h before it reaches its limits.

Now, the part which makes Gogoro’s scooter different from all the others, is the fact that it is all electric but does not require plug in and charging stations. In fact, it comes with its own special stations, which instead of electricity provide new batteries. These are called GoStations, and the idea behind them is that you park your scooter in front, you pick a new battery and you drop off your old one.

How feasible this concept is, we can only speculate at this stage (here is the demo video if you need more convincing). The idea is great as it solves the problem of having to wait somewhere for hours before your battery is good to go, and also having to find ways to safely dispose of the old batteries. You will essentially just have to pop your new battery and in a matter of seconds you are good to go.

However, new infrastructure is not so easily implemented in urban environments, as property owners have to be consulted and convinced. It will surely take quite some time before there is a sufficient number of these GoStations around,  before looking for one is no longer a hassle. After all, each station costs $10,000. It is also not so easy to convince customers that something is “the way to go” when there are quite a number of competitors around, who already have the charging stations ready and functioning and the scooters up and running.

The benefits are clear, the limitations are out there too, let’s see how far the concept will go.

posted by The Green Optimistic