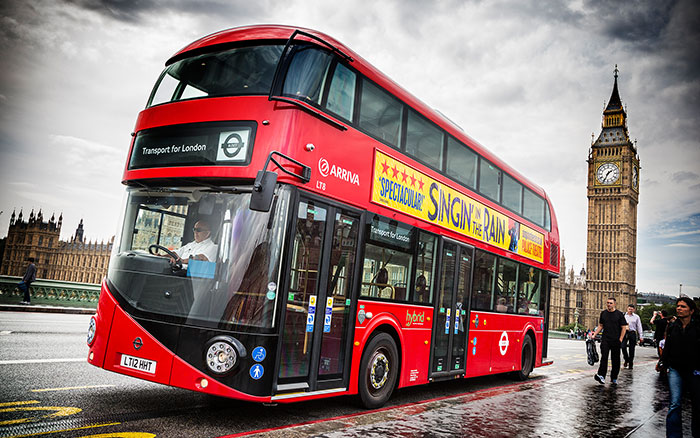 For years, London’s red double decker buses have dominated the capital, where nearly 1,000 routes are operated by 8,700 buses, many of them doubledeckers. Although there has been a gradual move to hybrid vehicles, many are still diesel­powered.

The new electric buses will be used on Go­Ahead London 507 and 521 (operating between the cities of Waterloo  and Victoria). As most readers can probably guess, the deal will see BYD provide the chassis and electric drivetrains, while Alexander Dennis Limited will body the  buses  —  using  the  company’s  market­leading  Enviro200­like  midi  bus  design  as  the template.  According  to  Chinese  manufacturer  BYD  Auto,  the  zero­emission  buses should reduce running costs by about three quarters compared to a diesel bus and can travel up to 250km (155 miles) on a single four or five hour charge ­ sufficient to operate for a full day without the need to recharge.

First 100% electric buses go on trial on central routes with more expected in 2016. Two electric buses have hit the streets of London as part of a trial to see if the technology is suitable for shorter routes around the capital.

The 12­metre single deck buses will service Victoria, Waterloo and London Bridge stations running on routes 507 and 521 from today.

According  to  Chinese  manufacturer  BYD  Auto,  the  zero­emission  buses  should  reduce running costs by about three quarters compared to a diesel bus and can travel up to 250km (155 miles) on a single four or five hour charge ­ sufficient to operate for a full day without the  need  to recharge.  As  it stands,  the  new  electric  bus fleet  is  expected  to  begin service sometime before August 27, 2016. Given that plans from Transport for London call for all of the  London’s  single­deck  buses  to  be  completely  emissions­free  by  2020,  this  fleet  will presumably be followed shortly thereafter by others. Six further electric buses are set to be introduced into the TfL fleet in early 2014, four of which were secured with funding from the Department  of  Transport’s  Green Bus  Fund  with  a further  two funded from  Transport for London’s technology demonstration budget.

The new deal, worth £19 million, includes a full on­site repair and maintenance program for the term  of the  contract  and  combines the strengths  of ADL’s Enviro200  12m single  deck (with  18,000  units  sold  worldwide)  and  BYD’s  own  design  of  Iron­Phosphate  Battery technology and drivetrain system. The latter has been proven to deliver outstanding range and reliability  in  multiple  international  markets,  covering  millions  of  kilometers  of  passenger-
carrying service.

The decision by the two manufacturers to collaborate on this first fleet is a significant step. It brings together the proven, safe and long­range capabilities of BYD’s pure electric buses (the company has 3,500 in service worldwide) with the outstanding and high quality vehicle design and UK build capability of ADL.

The deal represents just the latest in BYD’s impressive recent string of successes. It’ll be interesting to see what comes of the company in the coming years. Global domination of the growing electric bus industry? Will other European Cities adopt the same policy and make City buses more environmentally effective?

From coolmyplanet.org we strongly recommend readers to question wether their city are in the right are not to take on this initiative.